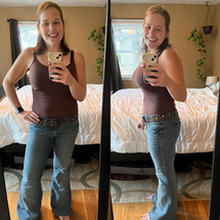 "It all started after my 33rd birthday. It had snowed in Northeast Ohio and looked beautiful. I wanted to walk down to the creek to take family photos. My husband obliged. When we were done, I hated every photo. I couldn’t stand how I looked. It was apparent that there was no camera trick to hide all the weight I’d put on in the last decade. I decided then I wouldn’t ‘be so ugly’ for my 34th birthday. So after the cake was all eaten and the New Year rolled in, I made a resolution…and I stuck with it.

I resolved to ‘do better for myself.’ I started off walking outside at least a mile and a half a day, through the snow and ice. I started counting calories and learned about eating healthier. It was hard at first. I was smacked in the face with the reality that I not only ate too much, but ate for the wrong reasons. Sure, I ate when I was hungry. But I also ate when I was frustrated at work. I ate when I was depressed, which is a lot when you have Seasonal Affective Disorder. I had never realized how much I used chocolate, ice cream, and my husband’s chicken bake as a pick me up. After a month of walking and calorie counting, I was pleased with my progress.

I had heard of HealthyWage from a news segment and decided to give it a go. HealthyWage helped me stay focused on my end goal on days I felt like giving up. An unexpected thing happened.

As the numbers on the scale went down and as I kept pushing toward my goal, I started to like myself again. I could keep up better with my dogs when they ran in the yard. I was no longer than the person slowing hikes down. I even completed a 20-mile hike and still felt like I could have hiked further. I became a happier person. Even friends and family I don’t see often, noticed the difference in personality, as well as in my appearance.

I can honestly say, I like myself again. I don’t grimace when I catch my reflection out of the corner of my eye. I don’t find excuses to avoid doing difficult outside chores. I am open to new adventures (20-mile hike or fitness classes at the gym). Heck, I even went back to college because I finally had enough of my lost confidence back to feel I could do better for myself and that I deserved better.

It might sound dumb and exaggerated, but I really feel I have a new life. I haven’t felt this good physically or mentally in easily a decade. I didn’t even know how bad things had gotten, since it was all so gradual. I’m not sure I would have met my goal, at least not in the timeframe I wanted, had it not been for HealthyWage."