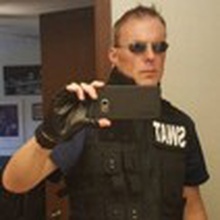 Greg was on a trip visiting family when he realized that it was time to make a change in his life and lose some weight. His father hadn’t seen him in some time, and expressed concern over the amount of weight he’d gained since he had last seen him.
As soon as he got home, he googled how to make money from losing weight, and found HealthyWage. He decided to go big with his wager, so he’d feel it if he lost it by not losing weight in the end. He said he looked at it like an investment in the stock market, only it was much more within his own control than that. It was then that he got started with the hard work of losing weight!
Greg says he had a rough 2014, and he let it get the better of him and he gained a lot of weight. He explained, “Most people want to know what food plan to follow. But I realized that it starts with attitude, and that the only thing in this life that I can control is my attitude and my health.” In 2014, he had let the difficult times get the best of him, and that in turn began dictating what he ate and how he cared for himself.” So the first thing Greg did was decide to “stop self-medicating.”
Greg enjoyed loads of success very quickly in the beginning of his journey! That was motivating and made it easier to continue on. He used his Fitbit regularly to help push him to move more. There were even weeks when he logged 180,000+ steps! Greg was into this!
As his challenge progressed his weight loss started to slow down, so he switched to a low carb diet to push him through to the end. It worked! What you see is a 75lb loss in 6 months! They say “attitude is everything,” and we think Greg might have just proved that!
Greg won $2,100 for his hard work, but he also won better health and a better outlook on life! Greg’s cholesterol dropped 54 points along with his weight loss, and he says he’s now taken ownership of his health. For the long-term, he says, the most important thing is keeping up that positive attitude, and not letting circumstances that are beyond his control influence how he manages his health and well-being.
Cheers to that, Greg! And congratulations!
P.S. Check out this awesome success video Greg made (above) – it’s sure to inspire!