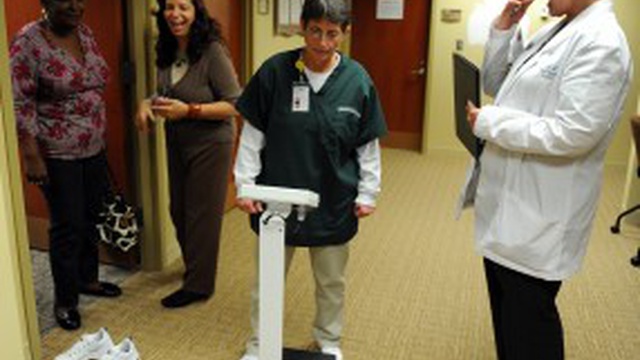 HealthyWage was featured on the front page of the Washington Post after HealthyWage partnered up with Meritus Health for a $10,000 Team Challenge. “At Meritus Health, a sprawling new medical center in Hagerstown, Md., 24 teams of five employees, most of them women, are in the fourth week of HealthyWage’s most recent contest against squads from 13 other competitors from as far away as New Mexico. Members of teams such as Big and Wanna Be Rich and the Meritus Muffin-top Droppers are laying small side bets and monitoring each other’s food intake in an effort to take home the top prize. Some weigh in together each week.” View: Excerpts from the main article: “The best programs [like HealthyWage] are carefully calculated to exploit human nature: our love of a windfall, the risk of losing a small but significant financial stake, the camaraderie of a team effort, the heat of competition. All in the hope it may push us to do something difficult and unpleasant: shed pounds.” “George Loewenstein,a behavioral economist at Carnegie Mellon University who has studied financial incentives and weight loss, says the HealthyWage competition is “using all the conditions that have been found in the research to be successful.” In controlled studies of obese veterans, Loewenstein and his colleagues devised ways to include social support and pressure, competition and, of course, money to spur weight loss.” “For some, the excitement of competition and fear of letting down the team are additional powerful incentives. “Think about battle,” Loewenstein added. “The combination of camaraderie and competition in battle is sufficient to get people to put their lives in great danger.” Check out the full article here!