join a challenge
Keep in mind that challenges are great tools and a lot of fun, but it takes work to lose weight. Individual results vary.

Booz Allen Hamilton came out fighting for their $10,000 Team Weight Loss Challenge! The competition was fierce for the over $32,000 in prizes, and met head on by this group of high achievers, losing well over 14,000 pounds! This challenge produced a tie – a four way tie for first, to be exact! All four teams maxed out on weight loss and ribbons, they were clearly *unstoppable!* So let’s get to it!

After years on her own personal weight loss journey, BAH employee and team captain Jennifer A. had been looking for some extra motivation to meet her final weight loss goals. She pulled together her close family and friends, and together they committed to succeed in this challenge. Their primary focus was weight loss, but they don’t deny that the money proved to be a large added incentive!

This tight knit team set up a team spreadsheet to keep track of their weight loss on a weekly basis, shared recipes and held small contests within their team to keep them on track – obviously this all paid off in spades!

The 12-weeks did not pass without challenge, however, being from Ghana, the cultural expectation around a woman’s appearance is strong, and the changes to their bodies were at first, not appreciated by everyone. One team member’s husband was not comfortable with the drastic change and asked her to withdraw from the challenge, concerned she would end up looking too lean. The team handled this with grace, and discussed as a team, as friends, and as family members with their objectors, and were able to resolve the issue together and continue.
Today – everyone is looking curvy and amazing and feeling FINE! Congratulations to team Bodies Revamped! 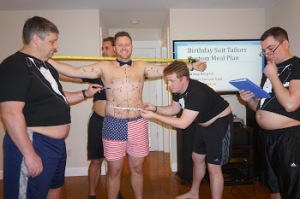 The Birthday Suit Tailors “Before,” marking up their pattern for success!

Kevin M. of Booz Allen hand picked this competitive team with the intention of coming out on top. This team was in it to win it from day 1 (as were so many of the BAH teams!). The Birthday Suit Tailors consisted of Kevin’s close friends and family, most of whom are competitive tri-athletes!

Once they started to see results, there was a major shift in perspective from money to continued improved results. Team members were seeing faster times, improved endurance, enjoying compliments and relishing the fruits of their labor. They kept each other accountable and helped one another through plateaus by sharing articles, workout plans and progress updates with one another. Their naturally competitive nature, competing both with each other and other teams, kept them pushing forward.

Kevin says the challenge really helped them to solidify healthier habits and become more conscious of the mindless eating and drinking they were doing before. They’ve come to understand a true sense of moderation and plan to continue while they take their training to the next level. Kevin is even training for his first half-ironman in July!

Congrats to the Birthday Suit Tailors!

Percent Weight Loss: 16.59%
Total Pounds Lost: 199 pounds
The Casualties of S’mores are three BAH employees and their spouses, led by Team Captain Kelly M. Kelly noted that they had all been talking about needing to lose weight, when the opportunity was presented by Booz Allen. When they decided to put together the team, they committed to one another to do everything they could to come out winners, and that that would require maxing out their weight loss! Not without a sense of humor, their team name comes not necessarily from eating too many s’mores, but from too many instances of having “some more!”

Kelly took the analytical approach and created a spreadsheet to track week by week incremental weight loss of her entire team, plus percentages and ribbons to ensure they would achieve the goal they set out for! This team was accountable to one another to the extreme, sharing not just pounds lost or percentages week to week, but actual weights of each team member! Their strategy was “diet first” – making sure their nutrition was on track, and then adding in activity and exercise later. They also shared healthy meals and completed a 5k together as a team!

It all came together perfectly, as Casualties of S’mores is one of our top teams, achieving not only tremendous weight loss succes, but also achieving their goal of coming out on top! Congrats, team! 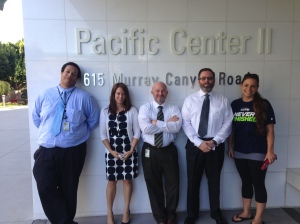 Percent Weight Loss: 16.59%
Total Pounds Lost: 178 pounds
This Booz Allen team of 4 coworkers and a close friend all had weight to lose and winning in mind, evident even by their team name, which stands for 16%, in binary code! With the cash on the line, the team took a “very tough love” approach when it came to keeping everyone on track, but fostered an environment where everyone could be honest and open about slip-ups.

The changes they saw helped keep them going, but their eyes stayed on that prize the entire way through. They are thrilled with their success and the changes that have been made (one team member now eats vegetables! Something he had never done in the past), they are even more excited to have achieved their goal of being number one.

We also had a ten way tie when it came to individual ribbon prize winners! These prizes are awarded to the top 4 individuals achieving the most ribbons who are not already on a winning team. Congratulations to all our high achievers below, taking home $120 each:

Congratulations to all our teams and participants for a spectacular challenge!

This could be you!