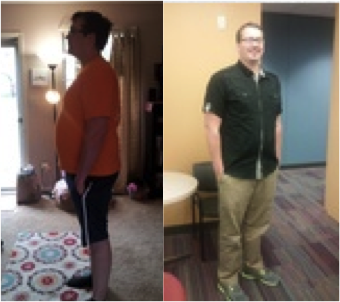 Chris already knew about HealthyWage because his employer, First Horizon, had already participated in some team challenges plus he had read an article at his company’s employee website about the challenges. Chris had recently gotten married and gained a considerable amount of weight and started to feel it physically.

The financial reward offered by HealthyWage was a huge motivation. The thought of losing the money was just as effective as the potential of “winning” the money. One other surprising motivation for Chris was the competition aspect to see if he could really do it. He changed his diet and his wife supported the new regimen. Jogging and elliptical training was his exercise focus as well as a fishing kayak.

Despite seeing the weight come off, Chris still faced challenges related to self-doubt, the anxiety that he could actually pull it off, and the desire for some food that he had taken out of his diet.However, as he noted, “Great challenges only make it that much more rewarding once they are beat. The greater the challenge, the greater the award.” It also helped him that he had a ton of support from his family, wife, and co-workers who helped him to stay focused on completing the competition. When asked what HealthyWage has done for him, he said, “HealthyWage provides a platform for getting serious about weight loss. I had to put my money where my mouth was to win.”